Hi Guys, I hope you are well and alright.

It’s so fantastic I am opening for Hawkwind on the main stage at HRH Prog 7 on November 7 at 4:30 pm, as The Attack Featuring Davy O’List.  Also recent articles in Mojo Magazine and Prog Rock Magazine about The Nice hit of America and the Roxy Music release of me on the BBC recordings really pleased me.

I am finishing off my new album ‘The Future’s Wild’  with electric acoustic guitar tracks and there are three bonus tracks  featuring my sister Suzie and Simon Phillips on drums from 1977.

Please, if you need any more information please get in touch, 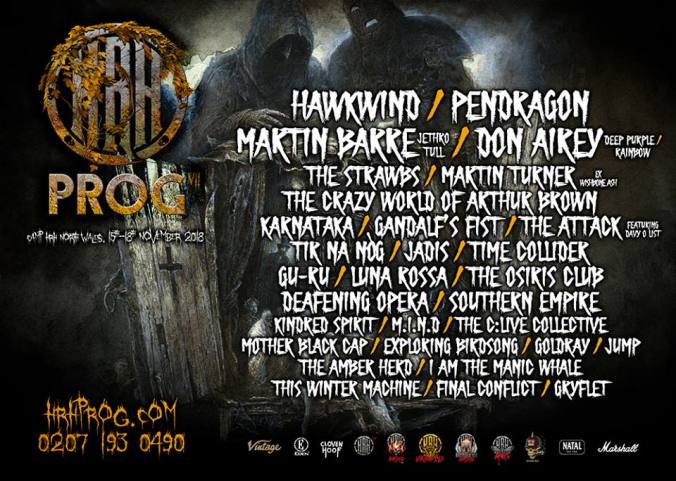 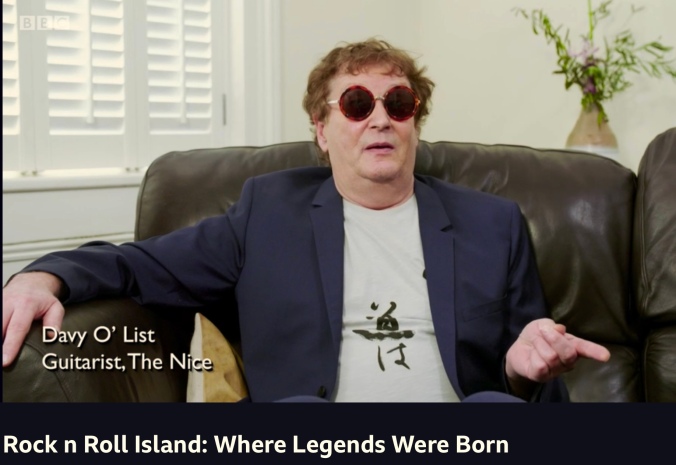 That’s me in the BBC documentary Rock n Roll Island shown last night, 27 Mar 2020. I watched it last night I loved it all. If you missed it you can still watch it on BBC iPlayer here https://www.bbc.co.uk/iplayer/episode/m000gp1k/rock-n-roll-island-where-legends-were-born

Davy O’List at The District Club on 3rd September 2016 here:

Hi new friends thanks for joining us. Just to let you know I was the first on at The Royal Windsor Race Course festival for “On Track For The Summer” on 23 July at 1 pm. I did a tribute to Keith Emerson with Bonnie K, The Thoughts Of Emerlist Davjak and Second Thoughts, from the latest album Second Thoughts on Made In Soho Records.

On Track For Summer

The Davy O’List Group performed Bonnie K at the Burton on Agnes Jazz & Blues Festival on July 2 before Pat came on with Anders Olinder and Rose Wagstaffe. 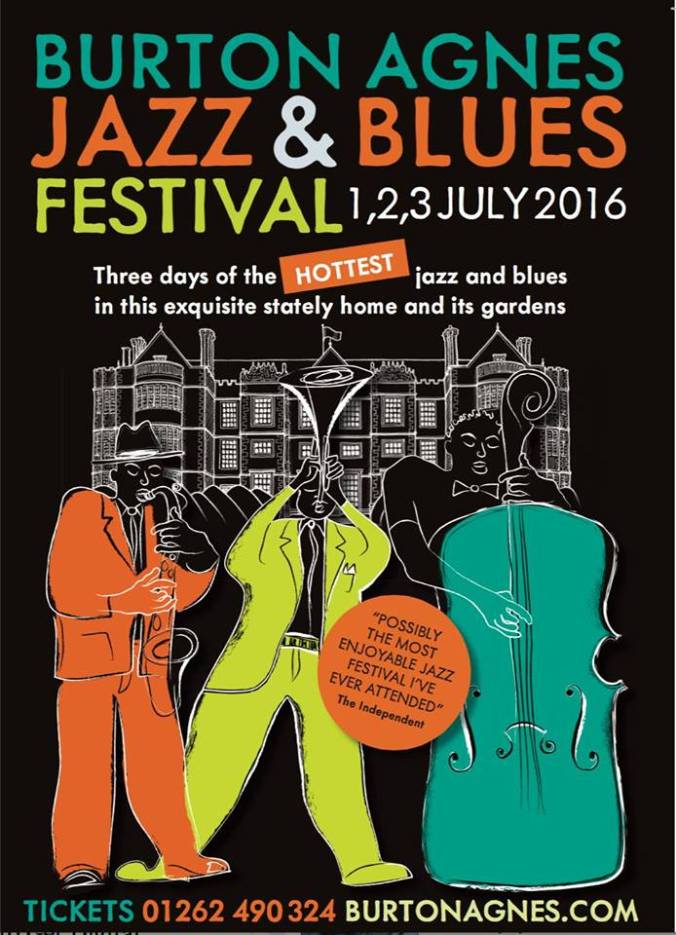 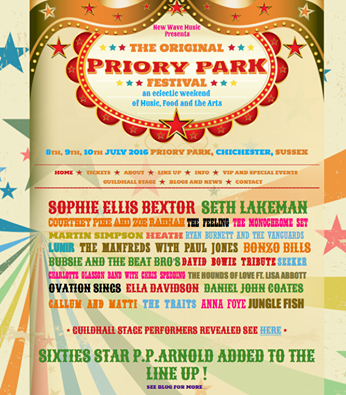 Davy O’List will be performing at Celebrate The Summer Of 66 festival at The Royal Windsor Race Course on 23 July with a whole host of well known artists including Donovan, PP Arnold and The Move. 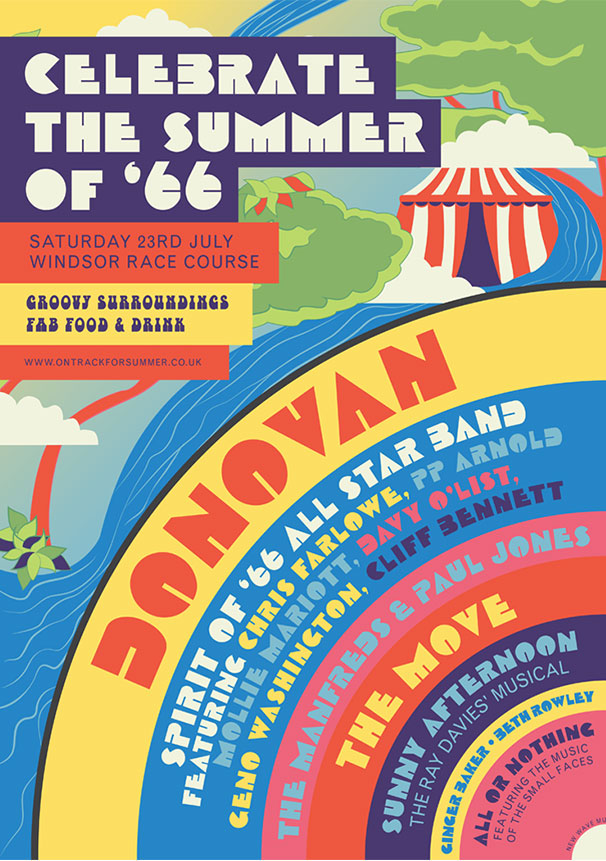 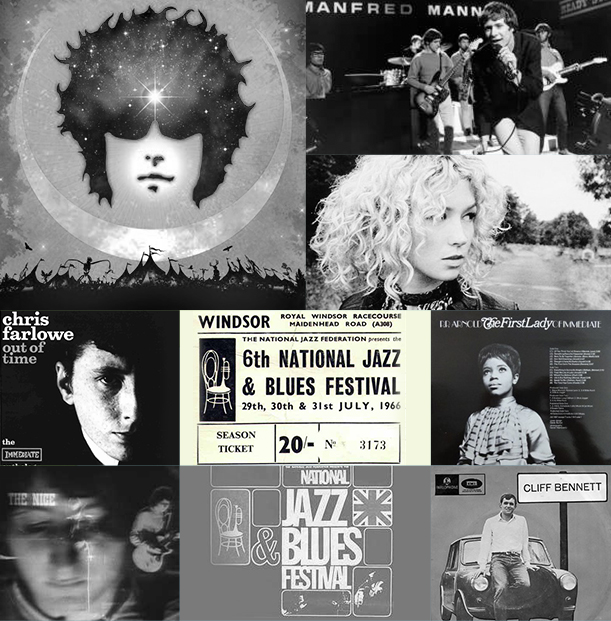 Got a great review in Record Collector for our Borderline show in January.

“When a band is cooking, you can tell by the smiles exchanged by the musicians. Davy O’List Band showed just how much they’ve improved since their launch a year ago, with a cosmic performance.”

We’re really pleased to announce a new London show at The Macbeth, almost a year to the day since we launched Second Thoughts there. The band’s come a long way since then and songs from the album are sounding better than they’ve ever done. So we’re all really excited to head back there for round 2!

It’s an early start to the show, with us starting just after 7:30pm. So if you’re travelling into London for the gig, you’ll be able to get the train home.

Our last headline show at The Borderline was brilliant, check out Prog magazine’s review here. 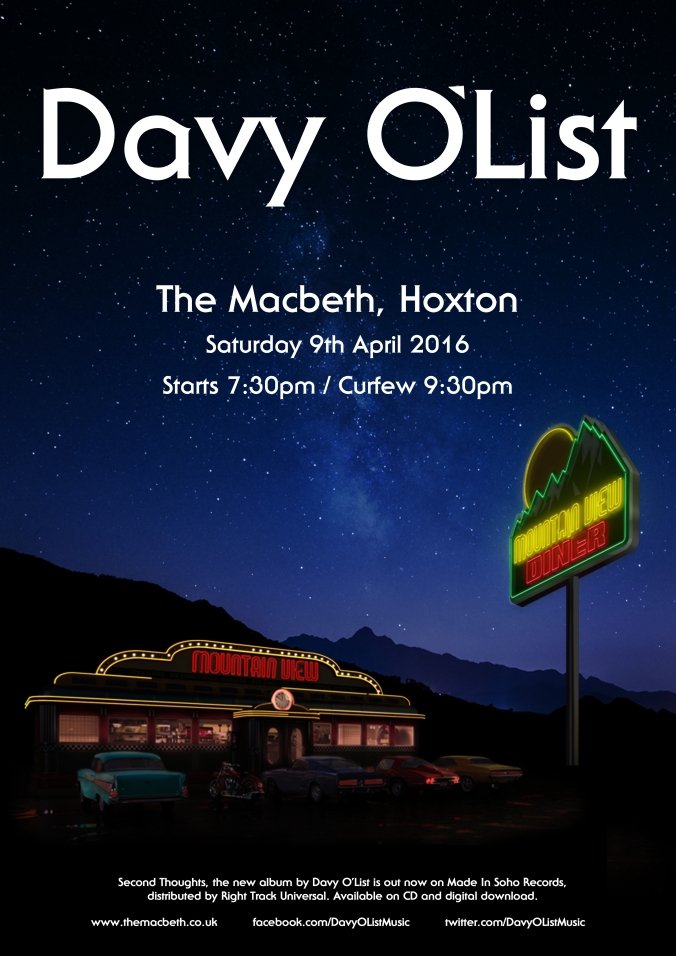 The guys from Prog magazine came along to our Borderline show in January and wrote a great review of the gig and took some brilliant photos. We highly reccomened buying the magazine to see the full review or you can read it on their website.

Here’s a snippet of it to wet the appetite…

That’s the Davy O’List: guitarist extraordinaire, prime mover when it came to advancing the cause of prog with The Nice, touring buddy of Jimi Hendrix, Syd Barrett’s stand-in with Pink Floyd, occasional Jethro Tull-er, part of the early Roxy Music… So where is everybody? They should be here in their droves, worshipping at the altar of the ‘List’ component of Emerlist Davjack. Especially since he has been decent enough to turn up in a shiny yellow jacket and cool rock-star shades. 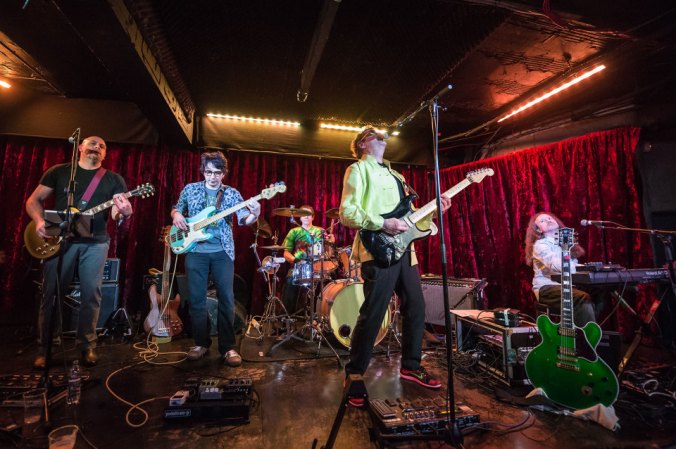 From the many advertisements for this special show I’d like to show you this one:

A little while back I spoke to The Liverpool Echo about the time I stood in for Syd Barrett at a Pink Floyd show in Liverpool. A brief snippet of the interview can be found below, or you can read the full thing on the Liverpool Echo website.

Imagine if your favourite band’s frontman disappeared – so one of his friends had to put on a hat, go on stage and pretend to be him.

It sounds impossible, but that’s what happened at the Liverpool Empire in 1967 when Pink Floyd’s troubled frontman Syd Barrett failed to turn up to a gig and fellow guitarist Davy O’List had to stand in for him.

Syd Barrett – who was born 70 years ago today on January 6, 1946 – led Pink Floyd to early success but left in 1968 amid reports of drug use, erratic behaviour and mental illness. He never released another record after 1970 album Barrett and died in 2006.

Davy O’List, then guitarist with The Nice, has just released a new album after an 18-year break – and spoke to the ECHO about his memories of that bizarre 1967 show.

The Liverpool gig was part of a package tour boasting an astonishing line-up of The Jimi Hendrix Experience, The Move, Pink Floyd – then known as “The” Pink Floyd – as well as The Nice, The Outer Limits, The Eire Apparent and The Amen Corner.

There were two shows every night: at The Empire there was one at 6.15 and another at 8.35.

Pioneering prog rock band The Nice had recently released their first album, The Thoughts of Emerlist Davjack, and jumped at the chance to join such a star-studded tour.

It’s always great to get reviews from fans, especially when they’re as good as this. A huge thanks for Steve Snelling for this brilliant review.

Davy O’list Second Thoughts 2015 brand new music and CD. This CD has long been in the making and on a personal level I think this is Davy O’List masterpiece, the CD kicks off with the opening track Second thoughts which is a fine slice of top grade Progressive Rock and in short Davy O’list help helped and with many other visionaries helped and innovated this music, what people don t understand when they are listening to the first great seminal Roxy Music LP all the great guitar tracks for example re-make Re-model Ladytron ect was the Work and from the mind of Davy o list!but that is another story, 2nd track to the Stars is awesome and a nod to mother nature and flower power etc, The Emperor is awesome and a fine slice of masterful Progrock in its true form, Touch wood was my Live Favourite having seen the Davy o list band three times live and I was glad this was included on the cd, Bonnnie a Nice Classic thrown in for good measure and why not, Halfway to the stars is the outro track and is full of surprises and is over 14 minutes long and is indeed a trip to the stars.

Second Thoughts by Davy O’List album review by Radio 68. It is better than The Nice. Davy O’List, guitarist, composer and mastermind behind the original edition of The Nice, after many wanderings returned with a full-fledged solo album. For those wondering who the particular sound of the Nice first LP, “The Thoughts Of Emerlist Davjack” (1967), given that ‘Second Thoughts’ the correct answer: Davy O’List, also known as Captain of The Attack, supervisor PP Arnold, filling in for Syd Barrett of Pink Floyd, prospective successor to Brian Jones and instigator of an unknown dandyesk group that would become famous as Roxy Music.

I compare the Davy O’List of debuting Nice happy with the Syd Barrett from the early days of Pink Floyd and Kevin Ayers of the young Soft Machine. They all wrote great songs that did a relatively conventional structure of a song in combination with special lyrics and innovative sound, a total concept that would blend in with the innovations in the social and cultural world, yes, often both soundtrack and sound board who acted themselves innovative society. In short, progressive music in the true sense of the word. For me hear ‘The Thoughts Of Emerlist Davjack (O’List), “Lullaby Letter’ (Ayers) and” Arnold Layne (Barrett) in the same category superior home.

Anyway, ‘Second Thoughts’ is intended as a sequel to the ‘First Thoughts’, which Emerlist Davjack so or the first album by The Nice, by O’List as “proto-prog” specified. This sequel also includes a progression in: meanwhile finds the prog in a post-era and modern technology opens up opportunities where producers, arrangers and musicians fifty years hardly dreamed of.

The title track, which if statement also opens the plate, effectively reminds the O’List of time: start with a rhythmic synthesizer, funky guitar, tempo changes, of course synthesizersolootje, but above all this is enthroned the song and melody. Not mix, but rather a sequence, almost a collage of styles and techniques that display complex patterns and still provide a strong song. Also on ‘To The Stars’ O’List delivers good job off. It varies in crescendo to the title (to the flowers, to the seas, etc.) and thus as a chorus conjuring acts with wild synthesizers as an underlying pattern. Despite its length, holding ‘Touch Wood’ all the features of a full-blooded rock song which stands out above all the clever guitar work. ‘Bonnie K’ is a reprise of the same song from the first album. Guitar and vocals tend toward the sort of heavy rock (standards of use fifty years ago please!) It Steppenwolf made popular, but the influences of soul, blues and funk are undeniable, and yes, you can even dance to it.

‘Halfway to Heaven’, with thick fourteen minutes the longest track our man ever composed, is a challenge. It’s not a song, but many songs, where O’List all his inspiration for release. It’s pop, it’s psychedelic, it’s prog, it’s space rock. And it’s all fine.

I recently did another interview with Classic Rock magazine, this time a live gig preview ahead of The Borderline show which is on January 23rd. Below is a short snippet from the interview, but the full version can be read in their January issue (available now) or on their website here.

You’ve released your first solo album in 18 years. What have you been up to? I studied film soundtracks and ended up teaching. It took a long time to find a record label, to make my new album Second Thoughts, and then to locate the people who would allow me to play it live. I also had a baby son.

You describe the music on it as “proto-prog”?

The Nice developed a new style of music with The Thoughts Of Emerlist Davjack [1967] and I was a part of that. I was there at the beginning of prog rock, but The Nice were its prototype.

What prompted your return to the prog genre?

The continued success of The Thoughts Of Emerlist Davjack – I still get royalties. I consider_ Second Thoughts_ a sequel to that album and I hope fans of The Nice will enjoy it. I intend to make a series of albums that interlink like symphonies, and the next album is already under way.